Last year one of my neighbours, Brian, went on an extended tour of Italy and Spain but finished up with a week in London.   During his absence I collected mail from his mail box and made several trips to the depot for the large, heavy boxes of books sent by courier from exotic locations such as Barcelona and Genoa.   Brian sure collects a lot of books! 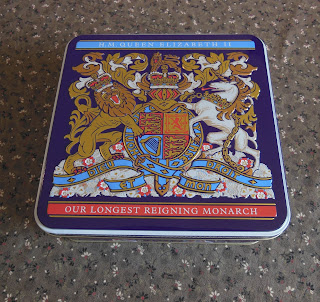 Anyway at Christmas he presented me with this beautiful tin which he told me contains the Queen's favourite biscuits.   Well, I don't know whether or not that is true, but if so, then the Queen and I have a lot in common :-) 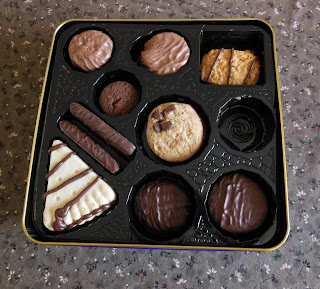 The "hole" is because my exceedingly royalist HD3QBEM has already sampled the goodies.   I am trying to say goodbye to the kilo of weight I received as a Christmas gift!
The HD3QBEM may eat the cookies but I will be snaffling the tin.   I love tins and apart from its royal connection this is such a useful size.