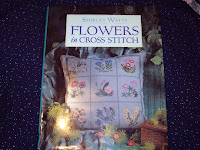 Isn't it strange what can tickle your fancy? I have always loved perpetual calendars ever since my uncle brought back a brass one from Kashmir when I was only about 6! Many years later in this book I found a cross stitch version and promised myself to do it one day. Well 'one day' has come. My youngest nephew (he doesn't read my blog so I'm safe) is turning 21 this year and what better way to celebrate this milestone than a perpetual calendar. 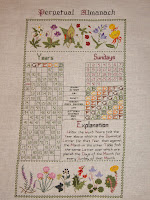 I changed all the years around to make it run for 100 years from his birth year - which should probably be quite sufficient as we aren't a family known for longevity. Now I have to get it framed and because of the size that will sure cost. Besides that I have no idea of what sort of frame I'd like. Any suggestions?

Posted by Margaret at 09:04 No comments:

January has been a productive month 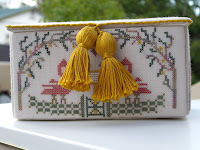 These hot nights make me restless so its good to rise early in the morning cool and that has meant stitching time so January has been a productive month. This box from Beardie Designs was a treat to stitch and a real pain to construct! I agonised over how to keep the lid down as my "hinge" at the back proved to be just the right pressure to stop the lid closing perfectly. But in the middle of the night - inspiration! A fishing line lead sinker in the head of the tassel would do the trick and it did! Looking at the box now I think the tassels may be too big but I am certainly not redoing them. Can you imagine my sense of satisfaction when I took these pictures this morning?
Posted by Margaret at 08:55 1 comment: 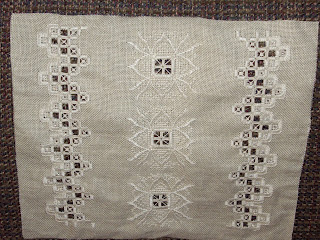 The past weekend was Anniversary Weekend in Auckland and Monday a public holiday. Anniversary of what you say? Well, the anniversary of the founding of Auckland City in 1871 but now it is a weekend of sailing and the Maritime Festival, for Auckland is also known as the City of Sails.
With fine weather and a three day weekend I worked in the garden, walked in the park and at long last put the final coat of paint on my doorstep.
Of course there was stitching and the Christmas Cracker from the JCS Christmas Ornaments 2007 is ready to complete tonight. Don't look too closely as it isn't perfect and I have changed the fabric, the threads and the beads from those in the instructions. Will post a photo of the completed "cracker" in the next day or two.
Posted by Margaret at 09:19 2 comments: 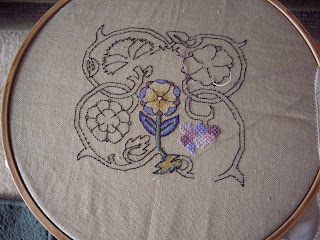 Hopefully if I put this up I will be inspired to continue stitching and one day complete the bag. The Queen's Sweet Bag from Nostalgic Needle is quite a task as one over one tent stitch and multitudes of Queen Stitch are not for the fainthearted.

I'm determined to make a mammoth effort this summer before I really can no longer see properly to do this very fine work. But with the sun and warmth and lately the rain, the gardens call and what is a girl to do?! I can see myself drawing up not only a list of tasks but a timetable to completion!

At last some photos! 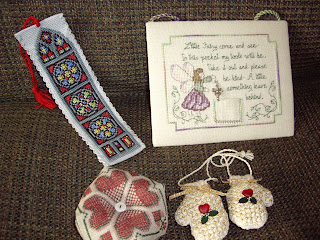 The group is of January finishes. A friend and I both did the Tooth Fairy from The Sweetheart Tree but while I made a wall hanging she did a pillow. Her niece is just at the right age to benefit and is already making a killing as our New Zealand coins don't really fit the pocket and so her tooth fairy leaves $5 notes! My tooth fairy will have to lay in the drawer awaiting the right age group as my nieces and nephews are all in their twenties so have no need of the tooth fairy - merely the money.
The book mark was a gift for my birthday last October and is finally finished and looks good - too good to use I think.
Posted by Margaret at 12:36 2 comments: 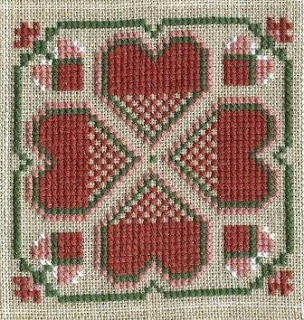 One photo and that not of the completed article. Keep forgetting to have the camera and computer with me at the same time! I stitched this little square to try making a biscornu - with major success I must say. The instructions from Annettes Acre were marvellous.
A local embroiderers guild in Auckland had their special "Town and Country" Day last Sunday and it was inspiring to meet up with fellow afficianados and see what they had been stitching. The hosts were the Embroiderers and Lacemakers Guild so quite traditional style pieces were on display. My eyesight sure isn't good enough to do bobbin lace but the pieces they had produced were exquisite and so very fine. My own guild starts again in February and I am determined to have several pieces ready for the 'new work table' so each evening after dinner it is wash hands and stitch hard! Great for the waistline too as there's no time for nibbles. My trainer at the gym laughs and tells me she's never heard of embroidery as a diet but its working for me. Well the stitching as well as the hour a day at the gym!
Posted by Margaret at 13:47 1 comment:

My first blog ever and it feels like a self introduction!
In part inspired by The Peacock's Feather I have decided to join in and so here I am. How often remains to be seen.
This month has been one of accomplishment - a Shepherds Bush ornament for next Christmas; cute little Christmas mittens from an old JCS and some progress on The Queens Sweet Bag (The Nostalgic Needle) which has been a WIP for far too long. Watch for photographs soon.
Posted by Margaret at 17:02 No comments: