The top, bottom and outer sides of the Octagonal Box are now completed and I've made a start on the inner.   As Land is the theme of the outside so Sea is dominant in the inner.
This will be very colourful!   Since this photo I have added three yellow fish and have my eye on the octopus next. 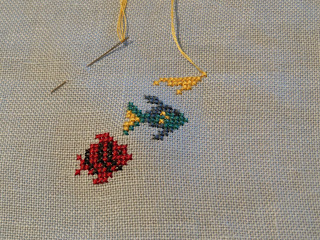 But I had to scratch the Hardanger itch and have started a doily.   The foundations were laid with no reverse stitching so I am feeling mighty pleased with myself. 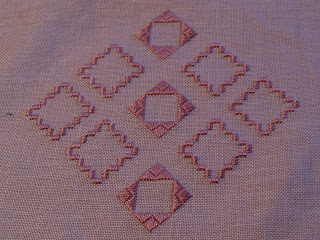 I made one of these doilies some years ago in a very well run SAL, Confetti of Hardanger from Bee's Needlework.   This time I am stitching for a 70th birthday early next year so hope all goes as well for the second attempt.
Two projects on the go?   Well thereby hangs a tale.   I was told that I'd been placed on the wait list for a pacemaker replacement and fully expected that to take some months given the state of the public health system.   Instead, I received a phone call last Monday to say they had booked me in for the next Monday so a frantic week at work ensuring everything was up to date, a few lists to ensure that all home chores were accounted for, a couple of garments cut out and prepped ready to sew and after the Last Supper tonight nil by mouth until bright and early tomorrow morning.
The worst thing about all this?   Driving is forbidden for two weeks!!
The best thing?   Plenty of time for stitching, reading, sewing and probably some walking as I have only 80km to go to reach the 1000km target.

Despite best efforts I’ve not gotten back to the my blog but do have progress to record on The Octagonal Box.  A slight senior moment in forgetting which was land and sea ended up with the blue where the green should have been but I reversed out of that corner and now the top and the four square sides are done. 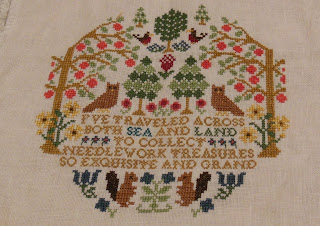 Just four rectangle sides and the base to go.   But....the base has the date on it so I may leave that till last.  The reason??   I am getting the hardanger itches again and have promised myself that when the outer "Land" layer of this box is done and before I start the inner "Sea" layer I will start some hardanger.   Indeed the DBEM and I are going out tomorrow to buy the Perle thread.   Well, we are actually going to buy Christmas cards but needlework store is close by so we will call there too.

Progress is being made

Visible progress is being made on the Octagonal Box.   Despite the fact that there are no specialty stitches to tempt me I am enjoying this one; even the over one lettering is fun.   And while stitching I have decided to make the needlework accessories that go into the box.   The reason being - I couldn't work out how to change the design of the words and remove "needlework" while retaining the overall balance of the design.
Anyway, here's progress -  I couldn't see why there was so much blue at the bottom until I took this photo.   But the missing words give the clue..."both sea and land to collect needlework treasures".   So squirrels or not the bottom had to be sea blue?! 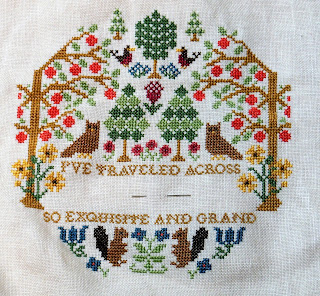 Today my boss arrived back after ten days in Tokyo.  She and her husband went up specifically to go to the two All Blacks matches being played there and they had a wonderful time.   She brought back some sweeties for me.... White peach and melon flavoured Kitkats.

Apparently this was test run for them and if they liked it they would book to go back during the Rugby world Cup.   They loved it and are off to the travel agent very soon to book a longer trip and take in more of the country than they saw this visit.   I wonder if they need someone to carry their bags?
Posted by Margaret at 20:38 3 comments: