Once again the DBEM and associated care have interrupted my plans and stitching progress has been slow.

The 14 year old television decided to stop showing pictures.   Sound was good and all other functions OK but no picture.   So after a few days I succumbed and Saturday afternoon a new one was delivered and installed.   So I have settled back to the regular life rhythm of The Chase followed by the news broadcast and then I hit the off switch.

Deruta Sfilato has come off the frame and I have only the antique hem stitch to do.   This was a trial piece and would not pass any close inspection but I plan to mount it on a piece of plain silk and keep it in my drawer.   Later on I would like to try again and see if I can improve my technique.  I am happy that I managed to follow instructions and teach myself a new technique. 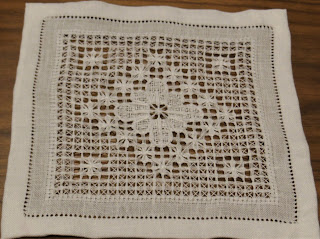 So I began the Acorn Etui and rather than “begin at the very beginning” I started with the Acorn Cap for the back and rapidly grew bored with the honeycomb stitch.   Effective it might be but there is little scope for imagination.  Now I have started in the back acorn itself and despite the lettering being stitched one over one, I am enjoying the variegation of the floss and am happy that it will all look well when finished. Thus I have started on parts two and three of the instructions which are by far the simplest but give me a good idea of the completed size.

And to show you the 'verse' and the cute little acorns.   A compound monogram goes in the box and the year below it so guess what I will be stitching next. 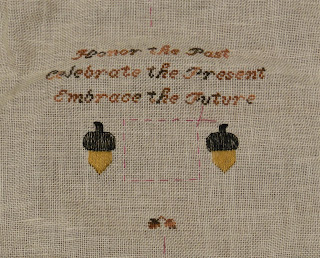 And as a palate cleanser I have stitched some more on the Kogin Coasters.   I rather like these and hope I don't "fluff" the construction.  Somehow I never have a great deal of confidence at that stage of the stitching :-) 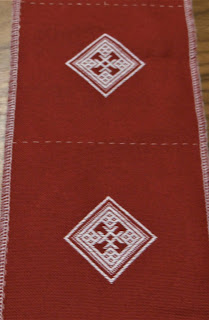 At the end of the month our Embroiderers Guild have a two day class which I have decided to do.   Little Sister is coming for the weekend so that the DBEM has company while I am out.   I have done the required preparation for the class and have sorted all my ‘non DMC threads’ into colour groups.   At this class I hope to learn something of the science of how to choose colours that harmonise rather than clash.   Up till now it has all been rather hit and miss for me and that could well be the reason I prefer to follow instructions rather venture into unknown territory.   I’m hoping for some increase in colour knowledge from this weekend class.    At the end of August there is another class scheduled at which Dorset Buttons will be taught but I’m not sure I will go to that one as it’s to be held during the week.

Progress on all fronts

First up a confession -  I have not fallen in love with Deruta Sfilato :-)   However I am delighted to have managed to decipher the instructions and to translate the drawings into linen and thread. There are four solitary 'blossom' to go in each corner and then the filling stitch to complete this piece.   An antique hemstitch border completes the piece which I think will just live in my drawer.   But all in all I am pleased and after sufficient break I may try another piece or even another style of drawn thread work. There are several more pieces of fine linen in my stash which are very suitable for this type of stitching. 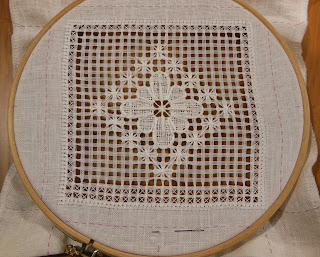 And I have started a set of Kogin coasters for a Christmas Gift.   The recipient doesn't know I have a blog so I'm quite safe showing you this.   All five will be the same design and will be stitched into squares although I have yet to decide on a backing fabric.   In Japan there are usually five in any set of kitchen or house wares so I will make five despite the fact that New Zealand generally has sets of six or twelve.  Japanese stitching needs to adhere to Japanese convention I think. 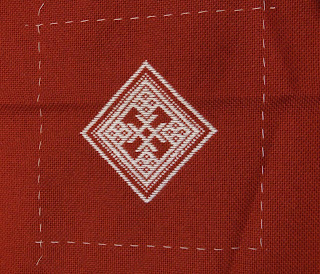 I have the fabric and threads ready for an Acorn Needlework Etui -  the chart for this was in four successive issues of Fine Lines back in 2003!!  Does anyone else remember this magazine?    I was so sorry when it went extinct.    For all these years I have kept the chart and suitable linen so at long last I am about to push the start button on this project.   The first piece is 27" by 9" on honeycomb stitch which forms the bag and creates the Acorn Cap for the top of the etui.   Confused?  I promise to show progress photos once I begin.   I don't intend to put the HNG in the branches of the tree either -  more branches would be better I think. 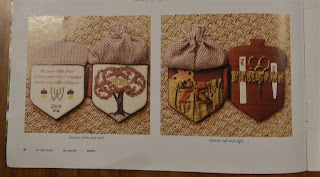 The instructions prescribe Gloriana threads but in the end the cost of obtaining those was prohibitive and The Ribbon Rose was able to provide a Threadworx alternative that I am happy with so I'm almost organised enough to begin.   I'm looking forward to this one -  but the Deruta needs to get finished first otherwise I will have too many projects on at one time.   Currently I have three in my basket and that is really two too many for my peace of mind :-)