Yes I have had it a long time

Tonight I called at the stationers to buy a new refill for my ball point pen. 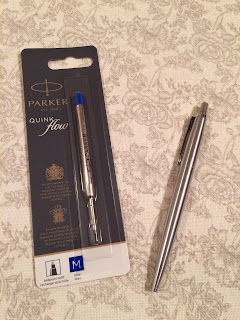 The very young assistant looked at the pen and said "have you had that a long time?"
Thinking "long before you were a gleam in your father's eye", I meekly answered "yes".
"A very long time", he said.
"Persistent fellow isn't he" I thought and told him "I received this as a gift for my 21st birthday."
"Is it engraved" he asked?
"No" says I.
"Well how do you remember then?" was his reply.
Cheeky fellow!!!   But in this pen lies a story.

On the grand occasion of my 21st birthday, Father was overseas on a business trip, Older Brother was out for the evening, Younger brother was living away from home working and Sister was at Church Girls Club so Mother and I sat on the sofa in our dining room and ate fish and chips from the newspaper wrapping and drank lemonade.    It was truly a non-event.   But I consoled myself with the thought that when Father got home he would arrange a restaurant dinner similar to the celebration we had had for Older Brother's 21st.   Father came home 2 or 3 days later and life went on.   A week or two went by and no mention of my birthday celebration; indeed, no present.   So I asked Father when I could expect my 21st and his response was that it was all past now so not worth arranging the dinner but he would ensure I received a suitable gift.   And a couple of months later after a further overseas trip he came home with a Parker Fountain Pen and Ballpoint Boxed Set purchased from the duty free store.  (I know that because the wrapping paper said so).   So I need no engraving to remember the saga of my 21st birthday;-)

Father had a habit of forgetting my birthday.   He did it again several years later when visiting me while I was living in Japan.   On that occasion he remembered the next day and was duly mortified - to the extent he gave me a substantial amount of Japanese Yen telling me to buy myself something.   I cannot remember what I bought but I can guarantee it wasn't a pen !

A discovery - when is 5 metres not exactly 5 metres?

Today the DBEM wanted some tapes sewn on a mattress cover so I dug out my brand new package of white cotton tape, uncovered the sewing machine and stitched on one tape.   But it wasn't sufficient for two (grrrr) 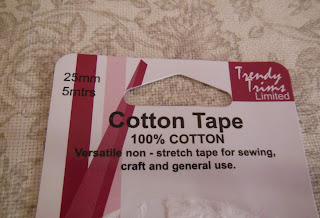 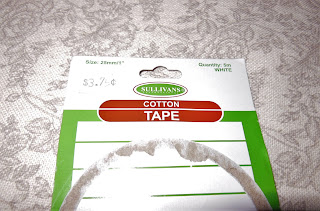 However the new one by Sullivans was exactly 5metres - not one millmetre more.   Whereas the Trendy Trims have a more generous approach and they give 5.5 metres.

Yeah and hooray for Trendy Trims.   And the DBEM is happy so all is good in my world.
Posted by Margaret at 20:47 4 comments:

In an effort to ease the boredom of eyelets on the Hardanger tassels I have stitched one rose (over one thread on 32count is hard on the eyes!) and sorted out my next project. 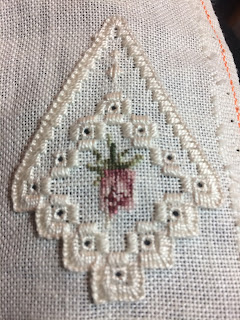 My current needle case for packets of needles is full to capacity of Tapestry needles and I need another to hold the sharps, chenilles, beading needles etc. 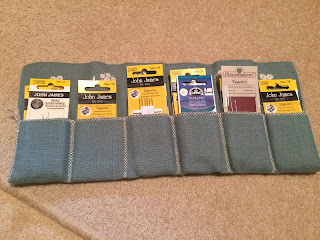 So a stash delve and a night of tacking has the linen ready to be put through the overlocker to secure the edges.   There's a lot of preparatory work for this but it comes together well.   I won't be doing Schwalm though - more likely some Sajou monograms. 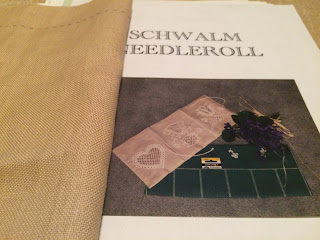 I haven't decided what colour to stitch in - perhaps my favourite DMC115.

The Angel Bookmark is all complete - although not yet cut out as I am using up the remainder of the linen and that is easier on an uncut piece. 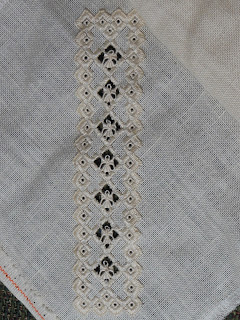 Still all seven of them look good and I am happy.   More to the point the DBEM is very happy to have this gift to give her friend.
On the remainder of this piece of linen I am stitching Hardanger Tassels,

There won't be too much waste when I have finished with this piece - which makes me happy.   I much prefer stitching on linen but with it being so expensive I try not to waste any.
Contrary creature that I am, this has not scratched my stitching itch.   I really need a project into which I can get really absorbed - but what?   There is just too much going on at the moment to be starting major projects. 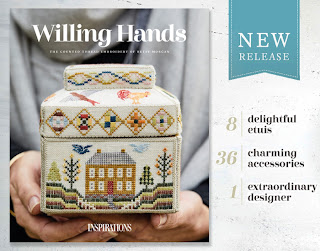 But I did order myself the new Betsy Morgan book from Inspirations Magazine.   It is due to be delivered in October and I feel sure I will find an absorbing project in that.   Until then it will be a bit of this and a bit of that I think.   There are one or two half finished items that need to be completed before R day!   There has been less stitching in the last couple of weeks as I read aloud to the DBEM but we have now finished both books by Michele Guinness (and before the due date at the Library!) so my evenings are back to normal again.
But life is good and The Countdown is almost on to the fingers of one hand:-)