First up my picture framer did well and I am thrilled with the chess board which looks just as I imagined it.   Now I need to source a suitable size set of black and white chessmen. 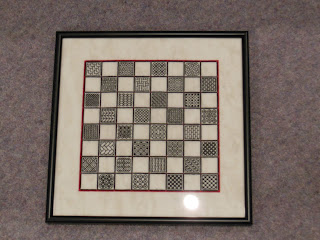 And I have made a start on the biscornu from the Frisian Whitework book.  So far so good but it is slightly bigger than I expected.  All the better to hold more pins? 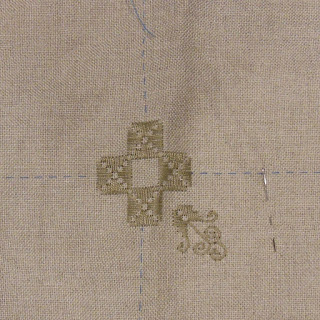 Progress on the Sajou sewing set too.   After a lot of thinking about what words to put in the gaps I realised that this great niece was born in the French speaking canton of Switzerland and as the design is from France I rather think it does require a touch of la Francais ! Voila!   I had blue silk dupion in my stash and so in spare moments  I will complete the construction - a pinkeep, a needle page and a scissor pocket.

Yesterday was fine so outdoor chores took priority and  the windows have been cleaned to a sparkle and the lawns have been mown.   Just as well,  for my sister and brother in law called in this afternoon.   And I was able to pick a lettuce from my garden for my salad tonight so I am very pleased.   We have another few days of fine weather promised so I will get the laundry up to date in between the appointments that look to make up a busy week.

The big news this past week is that the DBEM has got her hearing aids.   Now I no longer need to shout and repeat myself; the TV volume has dropped from 36 to 28 and the beaming smile on her face says it all.   We are both very happy with this foray into hi-tech although I am secretly a little disappointed that bionic eyes are not a realistic possibility for her.   Meanwhile I think she will remain the Deaf Blind Elderly Mother on this blog:) 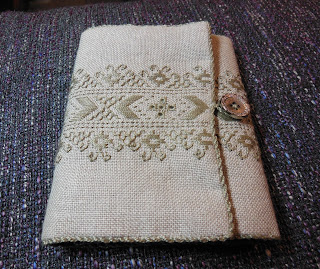 The stitching on my Frisian Whitework needlecase is complete.  I enjoyed stitching this and learning a new technique.  I will try the biscornu too and perhaps a scissor fob. 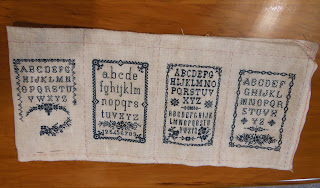 Now I am trying to finish off the Sajou alphabet project which I have decided not to make into a bag but to follow the inspiration I printed off the internet well over a decade ago.  This will entail a long hardanger style border all around the above and then further construction so finished product is some way off.   Still the ship is pointed in the right direction.  At the time I downloaded this it was called SALexandre.   Mine should be termed the Very Very Slow Sew:)

And I finally obtained some green linen suitable to repeat a project stitched around 20 years ago but which was on the wrong linen (Permin = too open a weave) and unsuccessful with the opening garden gate (the buttonhole edge pulled out and frayed).   With increased experience since and a better linen I am hopeful of a successful repeat.   So with high hopes I am finishing what I have on the go and dreaming of a new start.

And a good night to all

The DBEM bought me two needlework books as an early birthday gift and this week I decided to try my hand at “self teaching”.   Frisian Whitework is done on very fine count linen apparently so I thought I’d start there and reduce my stash of that while my sight is still so so.

This piece of 34 count linen came all the way from the States when the Criss Cross Row  was still a viable entity.   Colour is Wren’s Wing ( a close match to DMC 642) and fortuitously I had the matching Perle thread in stash.   All was going well until I realised that Frisian Whitework is counted in threes and after years of stitching hard anger my brain is wired to counting in fours:).  After a little reversing I began to make progress and am more than happy with progress so far.   Hopefully all will go well and a neat little needle book will result.

Yesterday I took the chess board to my friendly picture framer who is now removed from my “best friends list” as she wanted to glue it to a foam core!!!   She told me she framed a lot of needlework and indeed she did The Birds one for me last year but as this was not a picture to go on the wall she was adamant it could not be laced and she needed to use adhesive.  No way says I and retreated to take my precious chess board to the other, slightly more expensive framer in town.   He was ready for the challenge agreeing to perspex not glass, suggesting a flat backing board to which he would affix suede and without prompting informing me he would take care as this could well become an heirloom piece.   Ah, I do like a tall handsome Dutchman!!   In four weeks time my precious piece should be back home with me.

Now the remaining conundrum for next week is what to do with the other half of the Wren’s Wing linen.