Return from Rotorua and the new toy...

The HD3QBEM and I have been to Rotorua for a couple of nights stay.   Described as a thermal wonderland, the whole city bubbles and steams and smells of sulphur!   But the hot pools are bliss.
Just outside our hotel room was the aptly named Sulphur Point.   It was a pretty sight to see the steam rising all along the far lake edge. 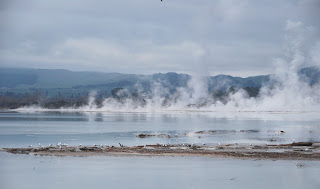 How do the seagulls survive on the border between thermal bubbles and cold lake?  At the lakes edge the bubbles rose constantly emitting their foul smell but providing photo opportunities for the many Asian tourists who were hopefully better at recording the "blop blop blop" of the bubbles on their cameras! 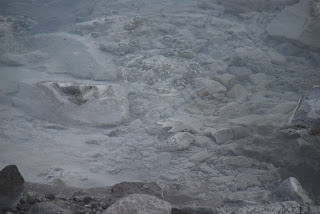 This Tudor Style building is named the Government Bathhouse and was built in 1908 when the Government wanted to create a South Seas Spa!   Noble ambition that may have been but it was singularly unsuccessful and the building is now a Museum and Art Gallery -  and a photo spot for most visiting tourists.   Here's a front and side view. 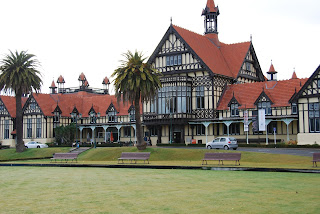 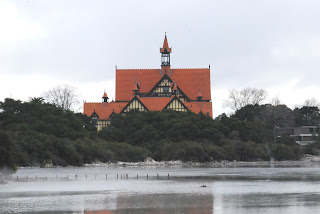 I took no stitching with me as I accurately predicted the lighting in the hotel room would be insufficient.    However I had a long soak in the hot pools, read some books, did some exploring and generally had a relaxing time.
And I promised you a photo of my new toy.  My one and only brother-in-law (God Bless him) is coming at the end of the month to install a  wireless router and to give me tuition in this.... 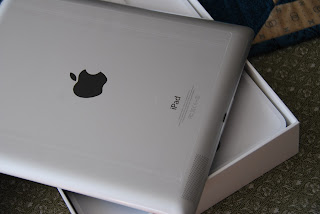 My first project with the new toy is to stitch this -  well not stitch it with the new toy but to bring the coloured pictures and instructions to my stitching seat and so to stitch another M!   I fell in love with this Alphabet but as I have no Italian I will have to follow the pictures and an iPad will make that so much easier.
The one and only brother-in-law is full of ideas and apps that he is convinced I need and will benefit from.   Much as it pains me to admit it, he is probably correct so we will negotiate all that when he comes to stay.
Now I am off to do some grocery shopping and then I need to pick up a needle before withdrawal symptoms set in.   Enjoy the rest of your weekend. 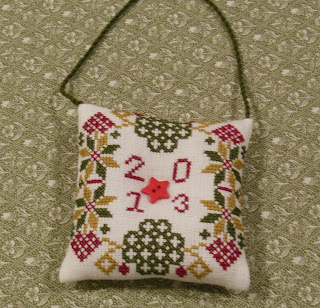 I wasn't sure how to finish this one and in the end simplicity prevailed -  a small cushion, a twisted cord hanger and a Christmas star for the dent in the middle.  The 28 count cashel linen and DMC threads all came from stash.
Tomorrow night the HD3QBEM and I are off to Rotorua for a couple of nights.   I plan on visiting the Hot Pools and getting some necessary warmth into aching bones. 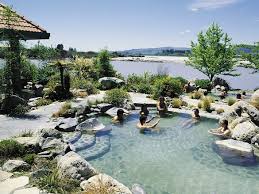 Hopefully the weather horoscope forecast will give fine weather even though the temperatures are around 12 degrees Celsius (=53 degrees Fahrenheit).   I'll be back on Sunday with a report - and a glimpse of the new toy I bought today!

In many ways this past week has been a cold cold week.   Our weather forecasters correctly predicted a polar blast of ferocious proportions and in this they were correct.   Further south of Auckland extreme gale force winds wreaked havoc and snow closed major highways and caused all sorts of grief for farmers.   The capital city, Wellington, was isolated at one point as all roads in and out were blocked.   Here in Auckland our temperatures dropped and tempers rose: at one time the level of complaints among staff rose to Guinness Record Book heights!
My head cold got worse before it got better.   I no longer have a sore throat and runny nose.   Just a hacking chesty cough.   Thank you all for your kind thoughts.
Manipulating tissues and needles doesn't work so I did more reading than stitching this week.   But I did find a wonderful hardanger acorn here.   (Have no fear you will manage to decipher the Cyrillic script if you can read hardanger charts.)   I raided my stash and have trialled one as a scissor fob. 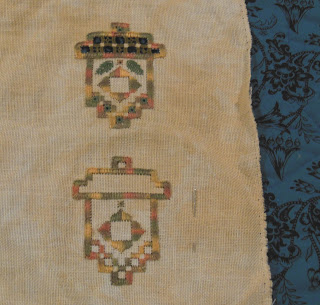 Tonight I plan to stitch the medallion in the centre of each side and then hopefully to continue with the Irish castle on my book cover while I watch Amanda Redman on 'New Tricks'.
Hope you all have a warm and uneventful evening.

I feel like a conqueror!   'England' in one thread of floss over one thread of linen has been quite a mission but I am pleased with the result.   Only Ireland, Scotland and Wales to go but I think a short rest is in order. 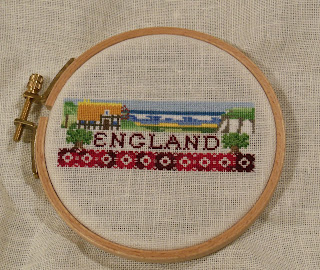 The hardanger tassel turned out well too.   This time I did not make any mistakes in the cutting and remembered to put a bead in the base to hold the twisted cord.   Yes, I think this one could be ranked as successful. 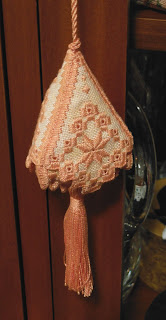 Tonight I am going to lace my crewel work piece and complete the June page of the  NMMSAL. Well, hopefully.   I have a nasty head cold and I'm anxious not to pass it on to the HD3QBEM so will take myself off to bed early and try that old wives cure of a lemon and honey drink.
So short and sweet tonight.   I hope you don't catch my cold.

Much as I am enjoying England and can't wait to stitch the beautiful thatched cottage, over one stitching on this fine fabric has turned me cross eyed! 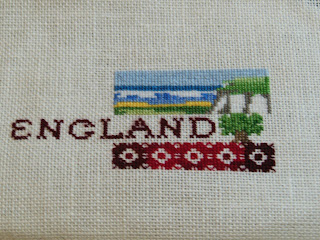 So I explored my stash and decided to create another hardanger tassel with remnants of this 28 count Picture This Plus Cashel Linen (named chalice) and some DMC perle thread (colour number 402). There is one more panel and seemingly endless eyelets before I can cut these and join them together. 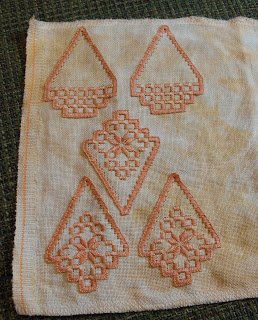 This project is very restful on the eyes even if not in my favourite colour.  As economical as always, I have fitted all six pieces on to one end of the linen, leaving plenty of space for future projects. 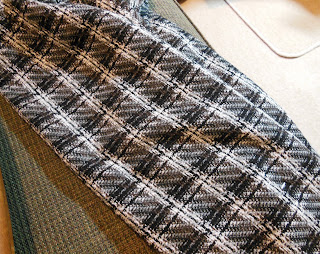 My new skirt has its hem stitched up and can now be deemed completed.   I am so very pleased with the fit of this one.   All those hours at the gym must have paid off and a regular sewing pattern required no alteration - except on length!   And no, I am not going to model it.
Well what next?
Complete the other half England band of the Book Cover -  a beautiful thatched cottage and another oak tree.
Complete the Hardanger Tassel
Select another Christmas ornament - there is an abundance of choice in my stash!
Continue to work on the Naxos Necessaire
That's enough to be going on with I think.
Posted by Margaret at 19:19 11 comments:

At long last I feel as if the end is in sight on my piece of cruel crewel work. 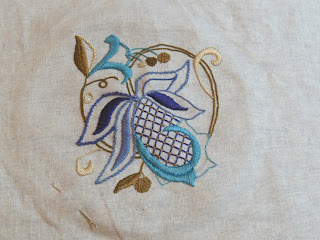 There will be more satisfaction in crossing this item off my "60 things to do before I 'm 60" list than there has been in the stitching of this piece.   At age 13 I fell in love with a piece of Jacobean Crewel work in an ancient copy of Stitch magazine my Grandmother had.   Then in 1997 I bought my copy of The Anchor Book of Crewelwork Embroidery Stitches in order to fulfil that ambition but alas fulfilment has not brought about a passionate love affair.   Still, a little more turquoise satin stitch and two rows of 'knots' in that pineapple looking fruit and this will be considered complete.   Blemishes and all! 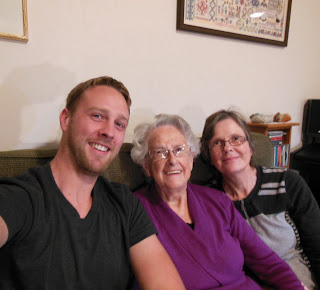 Last weekend my nephew came to visit.   His long arm and rock steady trigger finger produced this shot of the three of us.   I'm ashamed to say I don't know how the self-timer works on my camera so Drew performed the honours. (Can you catch a glimpse of his right arm -  that's the one holding the camera!)   He kindly explained, "they call them  a 'selfie' Aunty Margaret".  Thank you Drew. As a reward let me introduce you to Drew - the HD3QBEM and moi, you already know.
Posted by Margaret at 21:06 11 comments:

Today I went for a walk to say farewell to my favourite season -  Autumn.
The temperatures say winter but the day was golden, although by the time I went for my walk the sun was almost gone. 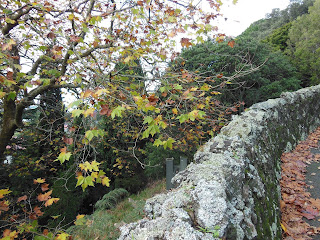 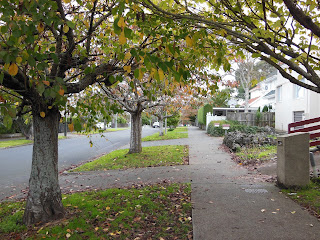 This is the progress shot of my Trip Book Cover. 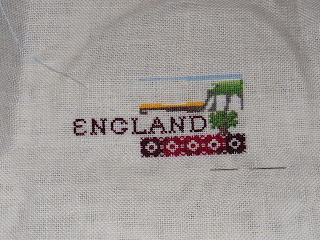 Stitching over one requires concentration and my nephew has been staying for the past couple of nights so I haven't been stitching much.  Last night he was intrigued to watch me make a twisted cord to complete my Scottie Mitten. I hope to sew that in place tonight.  We have a public holiday on Monday to celebrate Queen's Birthday so I hope to make some more progress then.   Tonight while I am talking I will start a piece of Sashiko- surely I can't go wrong with running stitch?