John to the power of two

This afternoon was another AVL saga.   I was expecting John and "another John" who turned out to be Kerry!   John rolled up in a TV3 station wagon, but John Kerry drove into the car park in a large mobile TV One studio.   I suggested he park in the area marked staff, around the corner of the building in order to provide less attractive options to our usual clientele.   His laughing reply was that his van was secure but I notice he did what I suggested:-)   It was intriguing to see these guys, from rival TV stations assisting each other to get the very best settings on the video feed and the audio link.  Cooperative competition? 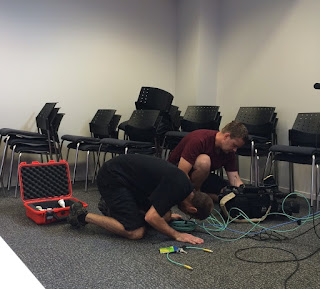 While they were actively connecting metres of multicoloured cables and talking in what seemed like a foreign language of techincal terms, I chatted to the TV3 reporter and sneaked this shot of "my two Johns".   And guess what?   After the unwitting tutorial last Monday I managed to set up the AVL link perfectly first time!  Johns are great and Kerrys not so bad either:-)