A visit to the Exhibition

Good afternoon to you all,
My Hostess belongs to the Auckland Embroiderers Guild and their annual exhibition finished today.   Just before closing we managed to find time to visit.   The cute little old building is called Bishop Selwyns Residence but it's only his ghost that lives there now. 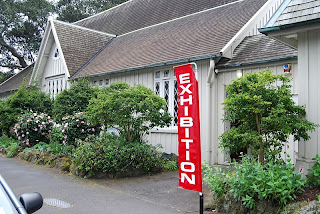 We had a good look around all the beautiful pieces -  somebody called Stella had stitched that famous piece called Beatrix Potter Companion Quaker.   I liked that one but my hostess and her HDHBEM were really attracted to all the artistic pieces.   The HDHBEM liked a thread picture of the New Zealand bush -  she told me it was in Silk Shading and my hostess said she hates doing that so I don't hold out any hope of a souvenir in that style.
In school holidays the Guild run a class for children called Little Sew and Sews and they had a colourful table of all their work.   Really interesting.   Those children are clever - see that big piece just behind HDHBEM in this picture.   Those children stitched that for a national exhibition and they won a prize.   I almost took my hat off to them - but I thought it might mess up my hair! 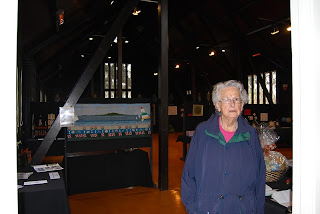 I wasn't allowed to take many photos of the pieces but the kind ladies Con and Rebecca said they would smile for me. 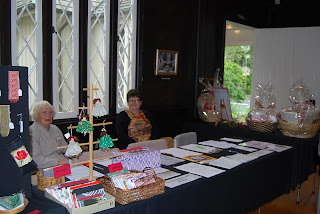 They have to sit by the door and make sure people sign the visitors book and buy raffle tickets for those baskets.   The HDHBEM and my hostess both bought tickets -  I hope they win something as those baskets were filled with all sorts of luxuries.
On the way home my hostess drove us past the house where the New Zealand Prime Minister lives -  even though she said "my friend John" I think she must have been joking as we didn't call in for a cup of tea. 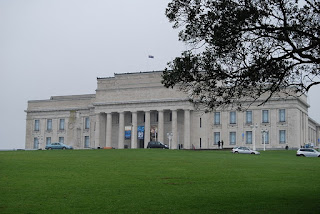 Then she took me to see her "favourite building in Auckland" -  this huge building is on top of a hill and looks out over the city.   It is the Auckland War Memorial Museum and my hostess really loves it.  She told me all about it but I've forgotten a lot -  the names of the battles where New Zealand soldiers fought in World War One are engraved all around the building above those windows.   At least I think that's what she said.  I said I thought that on a fine day, the building would look even more stupendous  - she had to agree with that!   Today is once again, wet and gloomy. 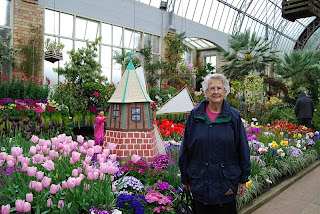 Just down the hill from her favourite building is the Winter Garden.   Strange name for it really, as inside it was full of colour - Spring flowers and so so fragrant.   I loved it there.   So did the HDHBEM.
We all loved these spiky orange tulips and the dark, almost black ones, 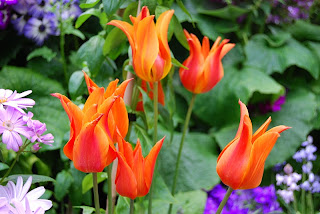 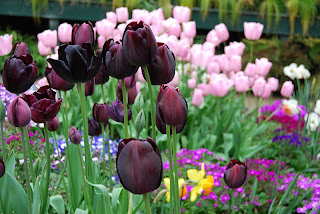 Across the courtyard was another building that my hostess said was the tropical house.   But she was concerned the heat and humidity might make her my hair frizzy so we just admired from a distance and then came home. 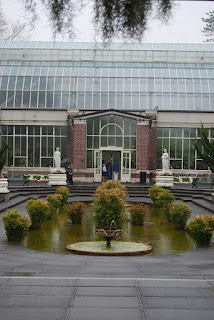 So endeth another day.   Despite the grey wet conditions of this weekend I think my hostess has done me proud.   I'm enjoying seeing all her favourite places and I love the way that the HDHBEM absolutely insists on having her share of the photographs.
My hostess has a busy week at work this week so I will be home keeping HDHBEM company and possibly helping her concentrate on the knitting pattern which seems to be causing some frustration!
Bye for now.
Posted by Margaret at 16:21

Margaret
Auckland, New Zealand
I have just recently retired from work. I love to stitch - mainly traditional pieces of counted work always in Linen and generally with DMC or silks. My other love is reading and I visit the local library nearly every week. My elderly mother lives with me. She is increasingly deaf and quite blind and in this blog is known affectionately as the DBEM.