A weekend away and a confession

The HD3QEM and I have just come back from a night away at beautiful Waitangi. 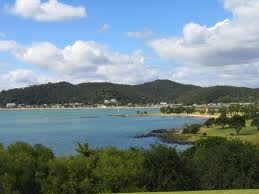 It was at this place (the green lawned area centre right) in 1840 that the now much disputed treaty between Queen Victoria and the Maori people was signed.   However we didn't visit for that reason. 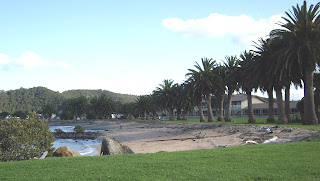 The HD3QEM stayed on the exact site of the current hotel in 1939 for an obviously memorable summer holiday with her parents, her grandparents and her uncle and aunt.  Oh, and her ball.   She is an only child and listening to her talking this weekend the ball featured much in her remembrance of this holiday.  As did the scrapping between her father and her aunt; her grandmother blocking the toilet and the subsequent warfare over who would clean it all up; her ball getting thrown into the sea and the tears that followed and then the joy when the tide returned said ball.  We replicated the memory of an icecream from the local store and I was assured that these taste better 73 years later!!
With all the beauty of the Bay of Islands at my doorstep what did I see from my bedroom window?
Only little Cottontail who is obviously a very tame and much loved lawn mower at the hotel. 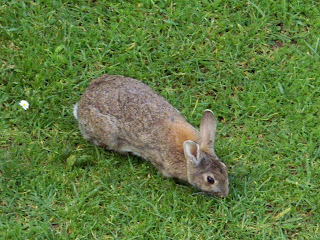 And the confession?   I did no stitching.  Not a single solitary stitch.   The 'needles without eyes' were active but despite baby Tabitha Abigail having decided to arrive a few days early her knitted jacket is not yet ready.   Those knitting needles will sure be smoking this week!