In the interests of keeping a record I have photographed these two small Christmas stockings.   They are meant to be tree decorations which gives you some idea of size. 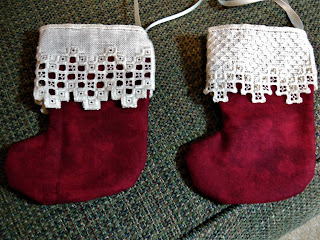 Over the years I have made several of these as gifts but made the effort to try a hardanger lacy edge on one this time.  The one on the right has the lacy edge.   I found it to be a lot less difficult than I had imagined so will definitely try that again.   The stocking on the left was supposed to have picots in each of the square holes but I admit to being rather afraid of picots and generally leave them out.   Perhaps that is the next Everest to conquer?
Posted by Margaret at 20:34

Margaret
Auckland, New Zealand
I have just recently retired from work. I love to stitch - mainly traditional pieces of counted work always in Linen and generally with DMC or silks. My other love is reading and I visit the local library nearly every week. My elderly mother lives with me. She is increasingly deaf and quite blind and in this blog is known affectionately as the DBEM.