Hello there everyone - we have had a weekend of wonderful weather.   Clear blue skies and the golden hue of autumn - my favourite season of the year.
And it was Mother's Day on Sunday.The HDHBEM and I went to our favourite restaurant Banzai where we were greeted like long lost friends.   Although I try to spoil my Mother everyday, I did go to a little more effort on "her day".   You have all seen recent photos of her  -  how about one from last century?? 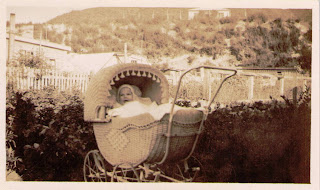 Isn't that pram just so cute -  probably not so hygenic nor user friendly as the modern version but much more romantic! 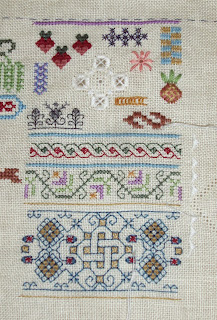 Progress has been made on the Historic Countries Sampler too.   This is the top left hand corner and is "England Pre 1700"   How on earth they stitched such complicated work by the light of poor quality candles I don't know!   The 'spot area' at the top had several specialty stitches but I particularly liked the Roman Stitch in the top right.   It was a new one to me and very rhythmical to stitch. 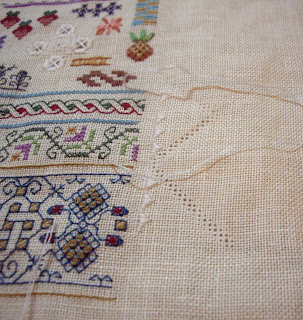 The first third has gone well enough and now I am on the Whitework Band down the middle.   There were a multitude of Queen Stitches in this first band and I find them rather a trial but oh how I dislike Faggot Stitch -  with an intense dislike.   The fear of making an error and having to reverse stitch, combined with the slower speed resulting from my dislike of the process of stitching Faggot Stitch is making this section my very very very least favourite~!!   However all good things come to pass and I hope to work steadily at this band during the week so as to be able to move further left and enjoy the Tudor Rose that comes in the next band.

Hope your week goes well.
Posted by Margaret at 20:26